In the local paper! 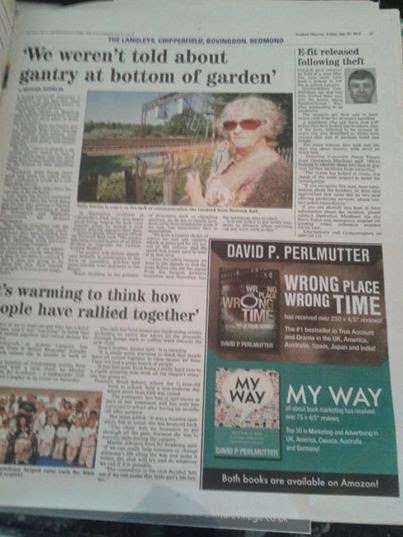 MY WAY is Free!

The marketing tips might help sell some more books.......


A tale which should be read. Both harrowing and haunting.
"Reading Wrong Place Wrong Time left me in a bit of a quandary. Did the main character get his just desserts? Was the ending what I wanted it to be? Well, to be honest, that is neither here nor there, as Wrong Place Wrong Time is a true story, and as a result, only had one possible ending. Whether it's the one that the reader desires is not up for questioning. This book intrigued me from the moment I read about it through social media. I deliberately shied away from scanning other numerous reviews of the author's work as (a) the real David is an extremely affable chap (which is not something that can always be said for the 'character' David - but then who's perfect in life?) and (b) I like to make my own decisions. I'm glad I did as now I see a debate rages as to whether this book is believable or not. For me, it is. And a gripping read. At times I didn't understand the lead character's actions as he faces his hideous journey into a hellish time in Spain - why did he do this? - why would he do that? - but again, I think that is truly apt and spot on for what most of us do in life. No-one is perfect. We can all regret doing something and the subsequent consequences that occur as a result. No spoilers here from me as I believe this a tale which should be read. David's words transport you perfectly along his somewhat bumpy and gritty ride and even though maybe you shouldn't always be on his lead character's side (that being the real David of course) I found I did sympathise with him. I wished him well despite not always wishing he'd followed a certain path. I would recommend Wrong Place Wrong Time quite happily. David is skilled at what he does with his writing, and also with his tireless and varied marketing. I salute his story, I salute his words, I salute his ability to write what must been a most definitely soul-cleansing but also deeply harrowing story. After all, it was his. He's lived every word, and I'm glad I was able to now share it."

Went onto twitter and guess what, my book WRONG PLACE WRONG TIME is featured on IndieWriterNews website for EbookMadnessMonday! How cool is that!