As you may know or then again, may not, one of my books, the #1 BESTSELLER Wrong Place Wrong Time is now becoming a movie thanks to Golden Mile Productions and yesterday I was interviewed about my thoughts of who I would like to play me and who I would like to play the leading lady Rosa plus many other questions. I will upload the video once it has been edited and then you can hear my answers.

Thanks to Alison, John and Dan.

Sitting around a dining table in a restaurant in Chelsea doesn't happen that often to me. I lie, because the last time was two months ago and before that was two years ago at a Pizza Express. But this restaurant was different. It was exclusive, rather grand and situated in a lovely courtyard in Sloane Square, just off the Kings Road. Get me, in Chelsea. Well, there is a reason I have visited that part of South West London and the reason is, to meet two members of the production company and one half of the script writing team for the book to movie project, Wrong Place Wrong Time.
This is the third meeting I've had with the production team, Golden Mile Productions, based in London, Marbella and Los Angeles, but of course the conversations on the phone, Skype and messages are in their hundreds. In fact we have our own WhatsApp group, coincidentally called Wrong Place Wrong Time. Gathered around the table last week seemed surreal. I had to pinch myself when one half of the script writing team pulled out her notes and we begin to discuss the characters, which I may add is one of the many reasons they want to bring the book to the screen. They feel that the story is full of amazing characters that the viewing public will endear to.
So, as the evening progressed, complimented by a lovely bottle of wine, of course, we discussed the sub-plots, how the film will begin, the soundtrack, which we are so excited about, as the music will be full of 80's and 90's hits. But, the goosebumps started to make an appearance on my arms as soon as I heard the scriptwriter say, "The book is fantastic, I've just finished reading it for a second time and I love and it will make a superb movie." She continued, "David, with your writing the reader feels, just like I was, that we are with you every step of the way." At this point one of the production team butted in and said, "Look at his face, a smile from ear to ear." And he was right, I was beaming. This is a dream, it's every author's dream to have a book that they have written made into a movie.
During the course of the evening, it was explained to me that the first draft of the script will take around 6 to 8 weeks, then we go through that together, edit, amend where necessary and once it's complete and we all agree on the final script, then it's off to the casting companies in London and America to pick a leading man, who will play me and a leading lady who will play Rosa, as the team want to focus on the love story that was developing, as well as everything else that went on in Wrong Place Wrong Time. As the team stated, so much did go on in the book, that the story will appeal to a wide audience, as there is something for everyone in the story line.
The latter part of the evening was spent discussing how I will be part of the team, on location, on the set and even helping to decide on the actors and actresses to play in the film. So, yet again the smile appeared and so did the goosebumps.
Another meeting has been arranged for next week to meet the other half of the script writing team and to further discuss the book to movie project of my, yes my book, a true story that is Wrong Place Wrong Time. One final note, they have requested for me to update them on the WhatsApp group of any further reviews that may come in on Amazon, Waterstones, Goodreads and from my publishing company. All I can say is that the group has been inundated with messages from me as the reviews are received daily from around the world.
If you wish to check out the many 100's of reviews, click the universal link to my Amazon page! relinks.me/B008955FG2
So, that's it, a little update of how I am living the dream and I might just post another article after next week's meeting! 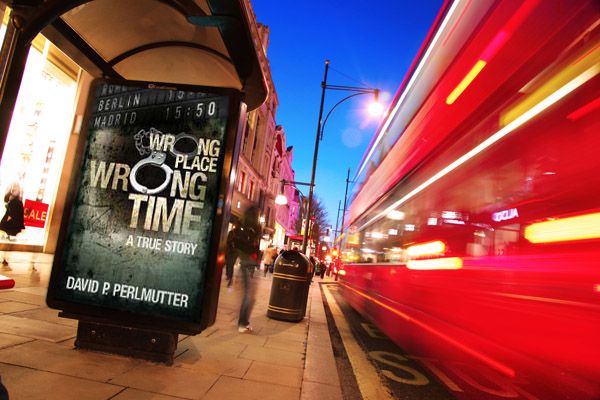