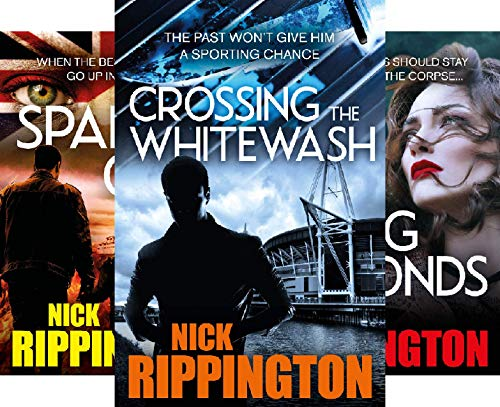 Sometimes your best friend can be your worst enemy
In Book One of the Boxer Boys series, talented 13-year-old sportsman Gary Marshall experiences the realities of living in a poor suburb when knife-wielding thugs try to rob him of his bike. Rescued by streetwise tough kid Arnie Dolan and his dog Stevo, the two strike up a close bond, forming a gang called the Boxer Boys to protect themselves and their territory.When Gary accepts trials with a professional football club, the boys go their separate ways, only to be thrown back together when his parents split up. As Gary's world spins out of control he suffers a horrific injury on a night out and worse is to follow when the Boxer Boys get caught up in a street brawl which leaves a man dead.Torn apart by circumstance it isn’t until eight years later that Arnie seeks out his former partner-in-crime.So where is Gary? And why is he so keen to let the past stay in the past?
1982: Thatcher, the Falklands War and a criminal on the riseIn Book Two of the Boxer Boys series, Hard man Big Mo rules family and friends with a rod of iron. From his base in a rundown area of London, he is driven by a desire to emerge from the shadow of his career criminal father and lift his family out of the poverty trap.When a warehouse raid turns up more than he bargains for, Mo finds himself in possession of the tools he needs to transform himself from petty criminal to big-time armed robber.Planning the ultimate raid, Mo seems to have everything under control until Prime Minister Margaret Thatcher orders British troops – including his younger brother Clive – to war in the Falklands. As Mo fights the police and his own vicious temper, Clive faces a battle for survival in the desolate south Atlantic.Eventually their two worlds will collide, threatening Mo and all he holds dear.
A savage murder, a killer on the loose...In Book Three of the Boxer Boys series, Arnie Dolan is back – and this time he’s in a wheelchair. Ousted from his gang, it looks like his time at the top of the criminal underworld is over... but if you think that, you don’t know Arnie.By contrast, life couldn't be much better for his former best mate Gareth Prince. The sports reporter has landed a promotion on his newspaper, the Sunday Tribune Despatch, scooped a major award and moved in with girlfriend Anjie and son Max. A life free from Arnie is just what the doctor ordered.That is until tragedy strikes to rock both their worlds. Forming an uneasy truce, they set about finding the person responsible for a brutal murder. But soon they encounter hostility both home and abroad with the Brexit debate raging and hooligans rampaging through Marseille.
Grab Your Box Set
Posted by David P Perlmutter