Knuckledust is a 2020 British action-thriller film written and directed by James Kermack. 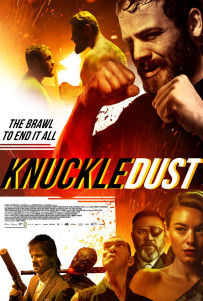 When a special police task force kick open the doors of elite underground fight den - Club Knuckledust, they find seven levels of hell, filled with the dead bodies of countless fighters, assassins and goons.
Only one man, beaten to a pulp, barely breathing, is still alive: Hard Eight. With a shady Government official en route to take him away, Chief Inspector Katherine Keaton and her team have ninety minutes to interrogate Hard Eight to find out if is the lone survivor or a multiple murderer.
With lies flying from everyone's mouths and corruption becoming apparent, Keaton starts to wonder "Who is the real criminal?

Check out on Knuckledust on IMDb

Read about Knuckledust on Wikipedia