Adventure by Chicken Bus: An Unschooling Odyssey through Central America by Janet LoSole

Adventure by Chicken Bus:
An Unschooling Odyssey through Central America
by Janet LoSole 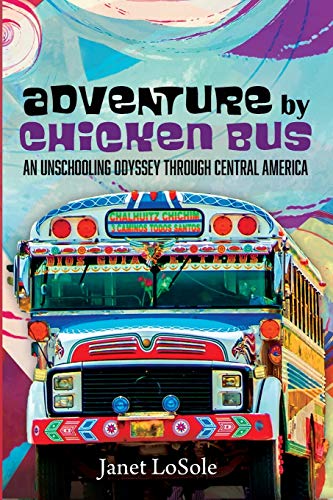 Embarking on a homeschooling field trip to Central America is stressful enough, but add in perilous bridge crossings, trips to the hospital, and a lack of women’s underwear, and you have the makings of an Adventure by Chicken Bus.

Buckling under a mountain of debt, Janet LoSole and her family are at their wits’ end. Determined to make a drastic change, they sell all worldly possessions and hit the road. With only a few items of clothing, a four-person tent, and little else, the family visits a sleepy island backwater in Costa Rica to save endangered sea turtles.

In Panama, they bounce around like turnips in the back of a vegetable truck to reach an isolated monkey sanctuary. In Guatemala, they scale the ancient Mayan temples of Tikal.
In between tales of begging rides from total strangers and sleeping overnight in the jungle with an indigenous family, Janet endorses community-based travel—supporting local businesses and favoring public transportation called chicken buses.

She also writes candidly about what it takes to travel long-term with two little girls amid the chaos of border crossings, erratic drivers, and creepy crawlies lurking at the edge of the jungle.