THE VIGILANTE SERIES - Books 1 to 6 by Claude Bouchard

THE VIGILANTE SERIES
Books 1 to 6
by Claude Bouchard 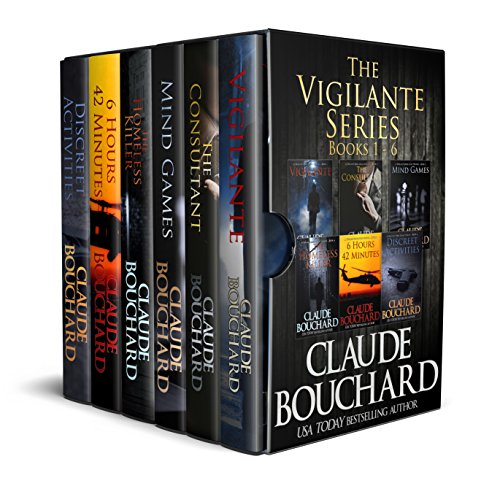 Doesn't everyone fantasize a bit about vigilante justice? Haven't you ever read or heard of some despicable act of violence and secretly wished you could have the opportunity to make the predator pay? Welcome to the VIGILANTE Series, a growing collection of suspense best sellers best described as thrillers and mysteries which will have you cheering for the assassin as justice is delivered in a clandestine fashion... But remember, this is fiction so it's not a crime... Available in kindle and print books...Vigilante (Book 1): A vigilante prowls the shadowy streets on Montreal, ridding it of its predators while the harried police race the clock to stop the remorseless killer before he strikes again. But whose justice will ultimately prevail: theirs or the vigilante's?The Consultant (Book 2): Following his involvement in the ‘Vigilante’ investigation, computer executive Chris Barry joins ‘Discreet Activities’, a government agency of the clandestine variety. Under the guise of an IT consultant, his first assignment is to investigate possible links between an import business and the murder of its MIS director. His cover is blown and things get personal, spurring him to show that murderers, drug lords, biker gangs and kidnappers are no match for 'The Consultant'.Mind Games (Book 3): Montreal is plagued by a string of vicious sex slayings and Captain Dave McCall is in a frustrated frenzy as he tries to bring an end to the savage butchery. Assisting officially is noted psychiatrist, Doctor Samuel Bowman and unofficially, computer genius, Chris Barry. With each passing day, McCall works his way closer to the truth, unaware that they are heading deep into the deadly core of 'Mind Games'.The Homeless Killer (Book 4): The homeless of Montreal are dying at the hand of 'Allan', a serial killer set on ridding the city of street people. As the killer taunts the police about the increasing body count, Captain Dave McCall calls on the services of 'Discreet Activities' operatives Jonathan Addley and Chris. All while fighting the city's proposed by-law banning the homeless from downtown parks, philanthropist and activist, William Enright, joins the law-enforcement crusade to capture the assassin. But will the combined efforts of the law and old money be sufficient to stop the 'Homeless Killer'?6 Hours 42 Minutes (Book 5): Though none of them had ever been involved in a job like this before, proper planning, careful organization and the inside information available to them ensured this bank heist would be a piece of cake. Ten minutes, in and out, was all it would take and they'd be sharing 2.5 million dollars. Nothing could go wrong as they had thought of everything. How could they know a new board member was visiting the bank that morning? How could they know the new board member was Chris Barry?Discreet Activities (Book 6): As a result of information gathered by intelligence agencies, a budding terrorist organization, the Army for Islam is suspected of planning an attack, its target possibly NYC, Burlington, Vermont or even Canada's famed Montreal. When four foreign students from Pakistan with known ties to the AFI arrive in the Montreal area, the 'Discreet Activities' team is more than willing to take on the additional workload. After two DA operatives die in a related suicide-bombing, the job becomes getting revenge on those responsible for this Holy War.

Buy Your Box Set Of
THE VIGILANTE SERIES